The Directorate General of Armaments (DGA) announced at the end of December Airbus helicopters contract for the development and production of the H160M under the Inter-Army Light Helicopter (HIL) program. Production H160M to be called Cheetah in the French armed forces, will irrigate the entire French aviation sector and contribute to the sustainable preservation of more than 2,000 jobs in France.

The military version of the new H160 model in Airbus’ civil helicopter line, the Cheetah, will replace the Gazelle, Alouette III, Dauphin, Panther and Fennec helicopters currently in service. After the pre-design phase, which was notified by the DGA in 2019 to Airbus Helicopters and Safran Helicopter Engines, development will continue until 2029. The first production will start in 2024.

Thus, the HIL program aims to replace five types of helicopters involved in combat, reconnaissance, operational light transport, support, training and public service missions with a single aircraft based on the H160.

The contract provides for the development of several prototypes, as well as the delivery of the first batch of 30 aircraft (21 for the ground forces, 8 for the national Navy and one for the Air and Space Forces).

The H160M Guépard will be equipped with a Euroflir 410 optical bullet from SaffronFlytX avionics and AirMaster C radar from Thales. Pilots will be equipped with an integrated Thales TopOwl helmet. The Cheetah will also have a self-defense suite, a satellite communication system and a data transmission system. Light anti-ship missiles will be in service. MBDA and machine guns in the pod and port.

The HIL Guépard will offer the armed forces operational flexibility thanks to the integration of the latest generation Thales equipment: the FlytX cockpit, the AirMaster C radar, the self-defense system or even the complete set of communications, navigation and identification (CNI) tools, including the new CONTACT. aero ERS is a software-defined radio station.

The Cheetah cockpit will be equipped with the FlytX avionics complex, completely redesigned from the point of view of ergonomics and equipped with the most advanced technologies. FlytX is the result of 10 years of research in collaboration with pilots. With its tactile, direct and intuitive interfaces, FlytX improves pilots’ interaction with the cockpit and their understanding of their environment.

The TopOwl digital display, the latest in Thales’ line of headsets, will add to the suite of tools available to pilots, ushering in the era of augmented reality. By integrating information and video from sensors, TopOwl enables flight in a degraded virtual environment and facilitates crew collaboration, thus increasing operational capabilities.

Thanks to an investment by Thales and the Directorate General of Armaments (DGA), the AirMaster C compact fixed-panel radar, weighing less than 20 kg, enables the Armed Forces to gain area endurance and patrol speed. AirMaster C covers all sea, land and air surveillance missions. Its scalability and self-learning capabilities will allow armies to classify and share large amounts of data.

Crew protection will be provided by a self-defense system optimized for the Cheetah. Threats will be detected from the electromagnetic to the optical domain and can be baited with automated countermeasures. The ability to manage sensitive electronic warfare data led to the choice of the Thales architecture based on the CATS-150, already proven aboard the NH-90.

To meet the requirements of its multi-functional role for the French Land, Aerospace and Navy Armies, the HIL Guépard will be able to count on an advanced connectivity package that provides it with a wide range of services. This will include a software radio from the CONTACT program linked to a compact avionics scrambler that will allow it to be integrated into the Army’s SCORPION bubble, communications with other Air Force and Space platforms, and NATO interoperability down to the classified level. . Micro-TMA’s persistent broadband connectivity capabilities, as well as 4G/LTE network compatibility, will enable expanded hyper-connected operational missions. In addition, the HIL capabilities will complement the radio navigation kit and the new compact identification equipment “self-surrogate”. 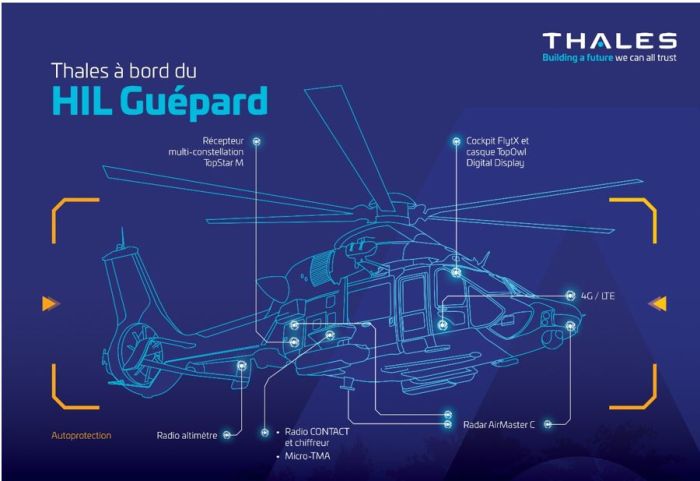 ” Providing a gradual replacement for 5 different types of aircraft, some of which have been in service for over 40 years, the Cheetah will provide our armies with the means to more effectively carry out their missions for the next 40 years. This program perpetuates the know-how and jobs of Airbus Helicopters, the European leader in the production of civil and military helicopters. “, – emphasizes Florence Parley, Minister of the Armed Forces.

Under the Military Programming Act (LPM) 2019-2025, the order for 169 Cheetahs, of which the first 30 are firm, is part of a ten billion euro global market, including: the development and delivery of 169 aircraft; providing a support and training system; maintenance in working condition (MSO) for ten years.

The reported market also includes: an order for ten H160 helicopters for the National Gendarmerie, approved as part of the aviation industry support plan, worth more than €200 million; the order of the DGA expert test center “Flight Tests” of the future test stand of the H160 helicopter to conduct flight tests for the development and qualification of equipment and future weapons systems.

The launch of Guépard ensures the industrial activity of the Airbus Helicopters helicopter plant in Marignan for the next 15 years. This is a program that will cover the entire French aviation sector, in particular its SMEs throughout the territory, where 80% of the H160 parts suppliers are installed in France, mainly in the south. In total, Cheetah and its export derivatives will provide more than 2,000 permanent jobs in France.