IForty-five years ago, on June 17, 1977, he disappeared on the corner of Peylorieri and Saint-Martin, home of the philosopher de Bonald, Mayor of Millau, academician and peer of France.

A white marble plaque affixed by his grandson in 1895 reminded passers-by at 4 rue Saint-Martin of his memory of the present location of part of a small square named after the philosopher-academic.

His son, Louis Jacques Maurice, Cardinal Archbishop of Lyons, was also born in this house on October 30, 1787. It was a beautiful residence with a curving exterior sculpture and a stairwell with balusters and paintings on the ceiling, but together they were successful. weakened by weight years. On one of its columns you could read the date 1732, the probable year of its construction.

Emily Arnal (1863-1935) mentions this building in her book The Bird in the Azure (1932): “In our city there is a beautiful house that no one talks about, and which the ignorant once bought for a piece of bread. 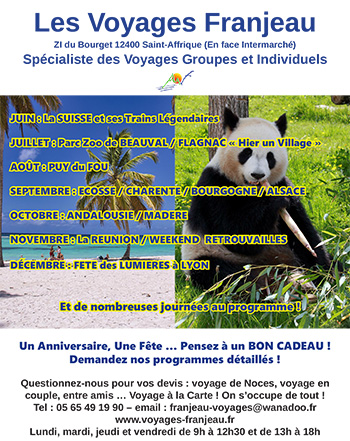 On the old street, rue Peyrollerie, where large families once lived, is the former hotel of Lords Bonald. Marble slab indicates two dates of birth and death of the philosopher.

This noble house was once mutilated, as was the coat of arms that adorned the gate. However, inside, ignored by passers-by, one thing remained intact, wonderful; stone stairs with arched vaults, with elongated granite handrails. On the ceiling is another fresco, where we see Ganymede, who was taken away by a thunder eagle. On the walls, blue tones, between the gray stones, form a harmony of gentle softness.

All this should be a museum for a city that had one day to have such a son; and this setting, full of mystery in its grandeur, would have better penetrated the powerful thought of whose eyes were opened in this setting, which is more like a monastery than a palace. (excerpt from “View of our mountains”, 1932)

Luxurious ceiling stairs made of balusters

It depicts a painting reminiscent of the abduction of a mythological character: Ganymede.

The iconography here calls for the eagle, known as the favorite messenger of Zeus, endowed with wide enveloping wings and harpoon claws, so the royal predator has a powerful offensive weapon, the effectiveness of which can not be denied. In Greek mythology, he is a Trojan prince, son of Tros, king of Dardania and nymph Calliro, daughter of the river god Scamander. He was loved by Zeus, who kidnapped him and made him the cupbearer of the gods on Olympus. It is later said that Ganymede, guarding his flocks on Mount Ida, Zeus took the form of an eagle to carry him out.

Artists often depicted the “abduction of Ganymede” in the 17th-18th centuries; he was probably dear to the nobles of Miyo, who, enjoying the vast private mansions but also well acquainted with the architectural art of the time, always adorned them with impressive staircases with wide staircases bordered by balusters or iron ramps, and crowned with frescoes.

In the 1930s, there was a small wine business on the ground floor of this building.

Mylou du Pays Maigre wrote on this subject when the construction of the future Emma Calve Square “New Place” was completed in 1935: “Isn’t it ungrateful for us, Millavois, not to honor such a memory properly?” After so many others, will I be allowed to make a wish? A large place was created in Millau, not far from the cradle of the Bonald family. Could it be possible to create a small corner of greenery there and, in the absence of a statue, to erect a very simple monument with two medallions that will revive the features of the Thinker and his son Cardinal? Miyo will be honored by this act of recognition and justice “ (Alades, Au Monna, 1948)

In 1934, it was planned to modernize the area of ​​Millau, and even at a discussion on May 3, the city council decided to build a public laundry on the edge of rue Saint-Martin, and not on the rue du Pres, as some residents. the neighborhood would have liked it (L’Auvergnat de Paris, May 19, 1934).

Time passed, and in July 1976, Operation City Development began. This project included, among other things, the widening of the rue Saint-Martin, its widening and access to the Erol. The goal is to create a road that connects this main artery with Nouvelle Square and the old center. So were we going to demolish an old abandoned building located on the axis of a breakthrough project? At a meeting on July 16, 1976, the city council, after heated discussions, decided in its town-planning plan to disappear the building called the Hotel Bonalda. For a while we thought of saving everything that could be saved (stairs, front door pediment, floor), the monument is being classified, we started by demolishing the Hotel De Corneilhan, which stood opposite the Hôtel de Sambucy, without doing too much many waves.

“In the municipal team, we have the greatest respect for the remnants of the past in general, and for the old Mio stones in particular. Arriving at the town hall, we were faced with a paradoxical problem: I’m talking about a quarrel over the demolition of the house of Bonald.

Perhaps the last municipality did not choose the best place to trace the way to the old town. There may be other solutions. But the question is not here.

We found ourselves before three-quarters of the work was completed, which already required the demolition of the Corneilhan Hotel, which was worth the controversy.

One hundred million elders have already been involved in the operation. The city could not afford such expenses in vain. Conservationists have aroused many people, and beautiful people, uneducated ministers, and shouted unclean. Why were the previous owners so jealous of this conservation, knowing well the projects of the Municipality?

Why did the esteemed descendants of the family of the hotel’s founders petition for the petition when they left the ancestral home?

Milwaukee’s taxpayers do not have the means to keep a sentimental souvenir at their own expense, no doubt honorable, but of very relative architectural value. Their position would be different if it were a masterpiece.

Assuming my responsibilities and in full agreement with all elected officials, I ordered the demolition of Bonald’s house on Friday, June 17. Earlier, I took precaution and courtesy, informing the Society of Friends of Old Miyo of our intentions. It seemed to me that I had found some understanding with them, with one exception, especially since I had made a commitment to link their group to the future reconstruction and rehabilitation of Old Miyo, which, normally, they have been holding on to for so long.

I received many phone calls from various authorities and administrations warning about the consequences for the mayor of the demolition decision. I accept these consequences. This demolition, in the place where we were, had to be done, and it was. If my troubles can begin, then at least it’s over. Miyo must move forward without hesitation as soon as decisions are made (L’Officiel de Millau n ° 1, June 1977).

The controversy is very fierce, between curators who are tied to the legacy and innovators who want to clean and open the place. On June 17, the Bonald building collapsed, eroded by mechanical shovels, but, admittedly, the unit was half-destroyed, apparently only a ruin, and especially hindered access to our old city.

Today in these places, near Misericordia, the square resembles the memory of a philosopher, a bust, features of a thinker, well represented as desired. Skinny Country Mylou but in the situation he was probably far from imagining.