If the war in Algeria was widely discussed in the cinema, there are few questions about Harkis. Philippe Faucon’s initiative can be welcomed, especially since he, as always, is distinguished by the accuracy of his interpretation and the appropriateness of his remarks. The film, presented at the Cannes Film Festival’s two-week director’s festival, will be released on French screens on October 12, 2022.

This could be the second part High treason where the question of Algerian “auxiliary troops” in the French army was already considered. It was in Morocco, in the region of Oujda, where Philippe Faucon was born, that he shot Harkis in the fall of 2021 with Algerian comedians. He wanted to go back to this war in Algeria that obsessed him, his parents were very marked by it, his father was a soldier. The script is based on the story by Robert Lucas, Harkis, my battle brothers, but expanded during writing sessions with Yasmina Nini-Faucon and Samir Benyala. The dialogues seem simple, but in fact Philippe Faucon does not instruct his actors much, preferring to appeal to their creativity and sensitivity. If he prefers still shots, wide shots, or close-ups, it’s for ease of editing. However, they give the film an impressive restraint, enhanced by the absence of music (aside from Amina Bouhafa’s score at the beginning of the film, which sets the scene and informs the film’s pace). No overload, no pathos. Even the battles are shot in static frames, avoiding any spectacular drift. The limited shooting time also imposes brevity, which gives the film an extraordinary density, without effects or imposed emotions. It also comes from the accuracy of the actors’ attitude towards their character. 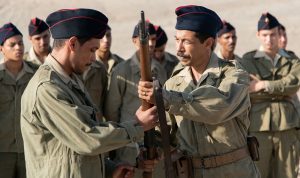 “They send our people first because they want to spare their own,” Salah’s mother said. Farmers forced into military service to support their families or in response to violence by certain elements of the FLN, human bulwarks for the native French, the Harkis were poorly trained and trapped between the two camps. When it became clear that they were considered too numerous to bring to France, as the mass repatriation of the French began, an attempt was made to keep them there under the guise of illusory promises of compliance with the Evian Accords. The severed head of the son at the beginning of the film is a good indication of the risk they took. 90,000 were evacuated, including families interned in the camps until 1976, but an estimated 35 to 80,000 were killed on the spot in the post-independence crackdown. It is around this fear that the film revolves, the radio reports on the resignation of General de Gaulle and the progress of the negotiations. Tensions mount, tragedy looms, and we sense, despite his apparent lack of bias, Faucon’s pent-up anger at their unfair treatment. 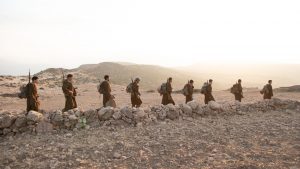 If the story is framed between several characters, Lt. Pascal and some of his men harka with a unique destiny (Salah, Karimu and Kaddour), and that numerous details mean that no one sets the stage, the romantic is set aside: it is above all a group, a subject, a silent and troubled group, each of which continues to face his choice or his fate. Everyone was trapped, including Lt. Pascal, who relayed reassuring promises from his superiors. It is clear that the film will not appeal to those on both sides of the Mediterranean who do not want to see history face to face. However, his rejection of Manichaeism and his choice of complexity and coverage of it in the most human way contribute to the understanding and knowledge of a conflict that never ceases to fuel indignation. 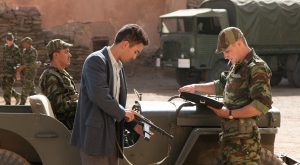 The film spares no one: neither the FLN (the murders), nor the Harkies themselves (vindictive or self-interested violence), nor above all the French state (humiliation, torture, purges, and ultimately the abandonment of several Harkies for probable death). Faucon goes straight to the point, using drawing as a method, as in his other works. Therefore, it is not surprising that the film was created together with the Dardenne brothers: this cinematography, which does not walk around the roof, does not deal with the subject itself, but takes up the story in its complexity and does not deny its context (date indication). The difference is that it is not subject to discourse, on the contrary, it focuses on the fractures within each group and shows how much each of them has to deal with the place they occupy in the military and political system. There is no psychology, no morality, just men caught in a net and having to position themselves without knowing where they are stepping. It is here that contour reveals emotion as Faucon captures facial expressions, gestures and details that speak louder than words. Because this film of bodies makes the eye listen.