So far, markets do not expect a significant decline in the overall price index, which forces central banks to maintain a restrictive rate and thus increase the risk of recession.

The end of the pandemic was to mark the beginning of a growth boom modeled on what the world economy knew after the Spanish flu of 1921. Roaring, buzzing, crazy, wonderful degrees speak for themselves to qualify these years of unbridled growth.

Judge for yourself: between 1921 and 1929, US gross domestic product grew by 50% in real terms. The victory of Allied troops in World War I ensures the dominance of the American economy in the world. The Roaring Twenties, which followed a pandemic that killed 100 million people worldwide, marked the beginning of an avant-garde era with the mass production of consumer goods such as the first modern cars. Unemployment is disappearing, and American consumers are showing their carelessness by resorting to loans en masse to finance their expenses and … invest in the stock market. From 1921 to … October 1929, it increased sixfold, marking a sharp end to the turmoil in the financial markets and the beginning of the Great Depression. But that’s another story.

Therefore, we should repeat these years of strong growth and great recklessness, but February 24 marks a major paradigm shift for the world economy. The beginning of the war in Ukraine, far from the boom of growth, marks the beginning of stagflation, similar to that experienced by the world in the 1970s.

Stagnant economy, high inflation: sometimes enough exogenous shock to plunge into stagflation. In the 1970s, OPEC countries decided to quadruple the price of oil in 1973. Today, the war in Ukraine is causing an increase in production costs and a decline in consumer purchasing power.

Based on consumer confidence in the United States, our leading indicator of the US economy is in recession, as it has always been below minus 20% since 1970.

Leading indicator in the recession zone in the United States 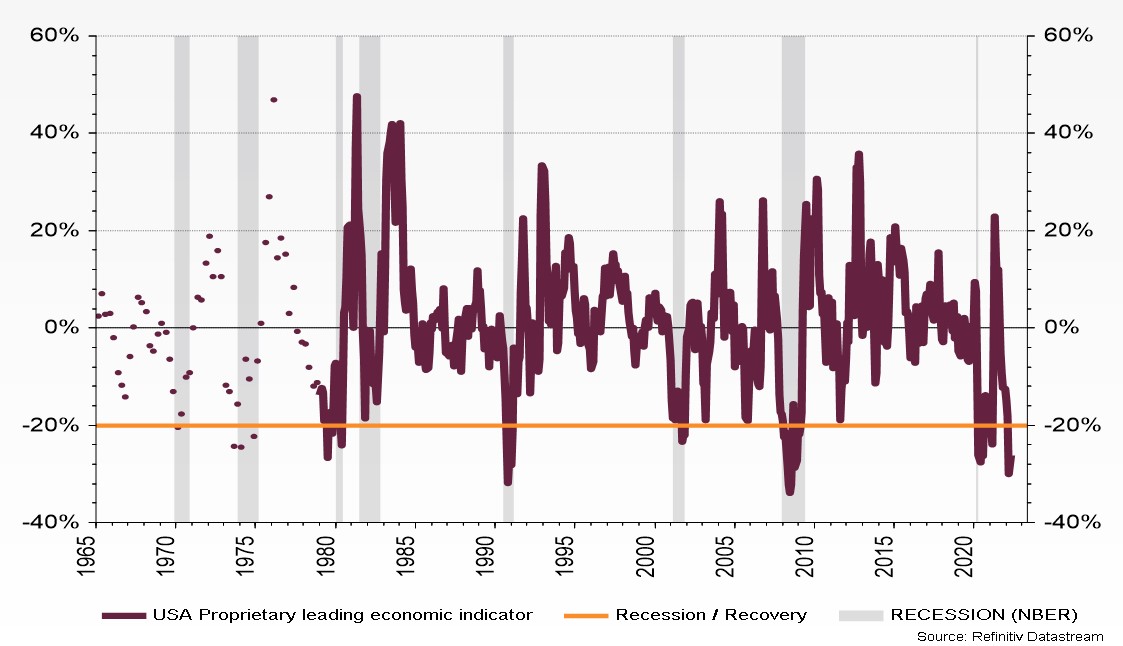 Is it time for a recession in the United States? Not so sure. However, gross domestic product fell in the 1st quarter. If the second were also the case, the entry into the recession of the world №1 would be confirmed. But … we need to return to the method of calculating consumer confidence. The University of Michigan is establishing the latter through a monthly survey of 500 American households. Do they think that their financial situation is better than it was 12 months ago? Do they expect to increase their spending in the coming months? The negative answer to these two questions explains the very low levels that this barometer of current and future consumption is currently experiencing.

However, there seems to be a gap between consumers’ opinions and their actions. Online restaurant booking sites in the United States report more traffic than before the pandemic. Retail sales continue to grow, as do overnight stays in the hotel industry.

How to explain this discrepancy between the caution declared by consumers and their constant way of life? The fact that households are now using their savings accumulated during the pandemic.

Of course, the US economy is on the cutting edge: consumers who live there in their reservations are unlikely to be able to sustain economic growth.

In the rest of the world, the time of decline has also come. The stagflationary shock is truly global, and global growth is expected to fall below 3% this year from 4.1% expected in January. In Europe, growth is slightly above 0%. In case of untimely closure of Russian oil and gas supplies, the recession will be ensured.

In China, retail sales have been falling for several years. Efforts to restore the balance of the Chinese economy to a consumption-oriented growth model have been unsuccessful. But, above all, the extreme policy of “zero covid” significantly reduces consumption. The Chinese government is continuing its quarantine strategy, risking a slowdown that could lead to a recession.

An economic downturn should usually lead to lower prices. February 24 changed the situation: what was supposed to be a temporary inflation spike associated with the pandemic was a long-term price shock. Inflation is much more related to rising costs than high demand. The war in Ukraine is causing the worst energy and food crisis since the Arab Spring of 2010. Physical supply restrictions in Ukraine due to the war, combined with economic and financial sanctions imposed by the EU and the United States against Russia, have disrupted energy and food. exports, which led to a sharp rise in prices for most goods (oil, gas, wheat and metals). Base metals (copper, nickel, zinc or platinum) have very low stocks, which increases the pressure on prices. Rising commodity prices are further exacerbating inflation in most countries. Therefore, it is not surprising that at the end of April, inflation in the United States reached its highest level in 40 years – 8.3% year on year.

Stagflation is a real nightmare for central banks. Should interest rates be raised to fight inflation? Lower them to avoid a recession? In March last year, the Federal Reserve showed the way: the priority of fighting inflation. The first increase in key rates is approved by the US Federal Reserve, and then the second, significant, this month. But above all, the great treasurer announces new increases. Initially more restrained, the European Central Bank also adopted a strong “hawk” tone and demonstrated its desire to eradicate inflation.

So far, markets do not expect a significant decline in the overall price index, which forces central banks to maintain a restrictive rate and thus increase the risk of recession.

Central banks are now making the same mistake they did in the 1970s: they want to tighten their monetary policies, when inflation is much more about rising production costs than over-demand. The desire to curb rising energy prices by raising interest rates is a heresy. The one that dragged Brazil into recession in 2021 after an untimely increase in the key rate, which rose from 2% in March 2021 to more than 12% today.

In 2012, Mario Draghi made a famous speech “regardless of cost” about saving the euro. Today, central banks are just as firm in their fight against inflation. It could cost them dearly.