In Ile and Wilen, the increase in activity involved strengthening the widespread park between the godfathers. She chose a repaired car.

Between 3 rivers, from Pacé, becomes self-propelled and separate scattering area. Additional material was needed to absorb the extra volume. However, the additional need was “only” 30,000 m3. It is with the material of 2015 a restored self-propelled spreader after 7,200 hours of service that he was able to gain access to this revolution. Investment amount: 360,000 euros anyway.

Several reasons prompted those responsible to consider such an evolution of equipment and organizations. On the one hand, farmers needed equipment that minimized losses from proliferation. Indeed, the increase in activity is mainly due to digestate, a product rich in volatile nitrogen. Therefore, the choice was focused on the burial system. The latter is more limited in working width than the drip line rod. Thus, it means a longer phase of spread.

The issue of weight is another element. The loaded self-propelled vehicle weighs 43 t. When working, it rolls to a width of 4m. For comparison, a tractor weighing about 47 tons distributes its weight on the roadway of about 1.30 m, or 70% less than the surface area. This difference in subsidence is all the more noticeable because the aisles are located closer to each other than with a ramp.

In addition, the road regulations allow a total rolling weight of 38 t for four axles or 40 t if the unit has five axles. The new spreading organization attracts a ton of transport, so there is no need to transport spreading equipment. This lightening of the trailer also makes it possible to use a lighter, less powerful tractor without a front weight. Finally, because this transport hub remains outside the sites, the site, especially in wet conditions, pollutes the road network less. 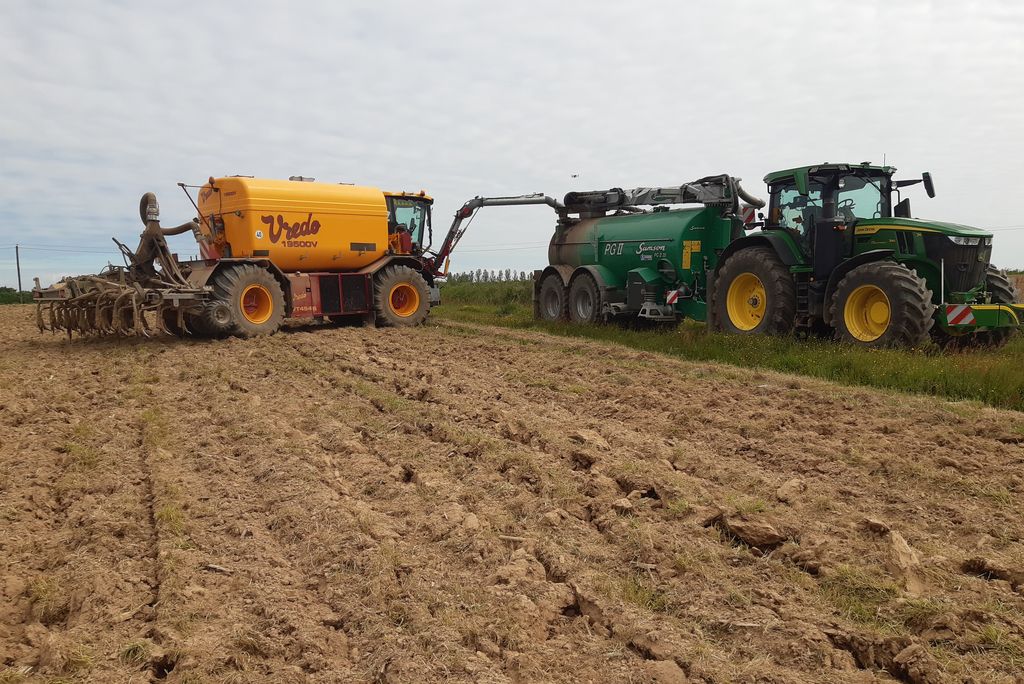 Dosage, as well as the distance between the field and the storage condition the number of units required for refueling.

Each material has a mission

For this stage of transportation, the intercuma is equipped with a ton of Mauguin 17,500 liters (30,000 euros). The self-propelled car feeds there, pumping through the upper exit. The cooperative rents a Claas Arion 640 (150 hp) under a contract for 350 hours per year. This tractor costs him 23 € / hour plus insurance 2 € / hour. On average, the machine produces almost 90 m3 / h while remaining in the field.

L ‘restored self-propelled spreader is Vredo VT 4546. It develops 450 hp to transport its tank of 19,500 liters and control the vane pump at 9,000 liters per minute. In three minutes the car is able to refuel. In addition, it has an alternating hydromechanical transmission from 0 to 40 km / h, Trimble auto-guidance system and remote pumping. Thanks to the latter, the tires (Michelin 1050 / 50R32) operate in a field with a pressure of 1.7 bar, which drops to 3.3 bar for travel between sections. 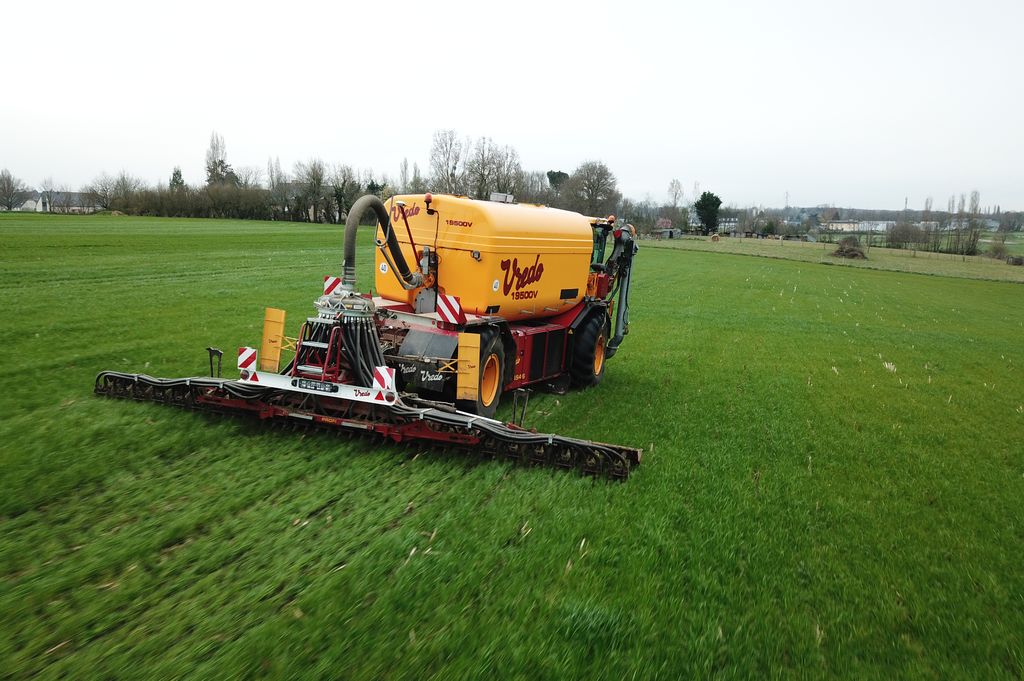 Here is a self-propelled car with a 9-meter Vredo Profi + injector. Due to the travel of the four drive and steering wheels, as well as the directional lift, it distributes the contact width of the tires by 4 m. Thus, this limits the phenomenon of compaction.

On its Vredo VT4546, 3 rivers intercuma has chosen a new burial ground with 48 discs with a diameter of 35 cm and an interval of 19 cm. Therefore, it operates at a width of 9 m. The investment in this equipment amounted to 58,000 euros. 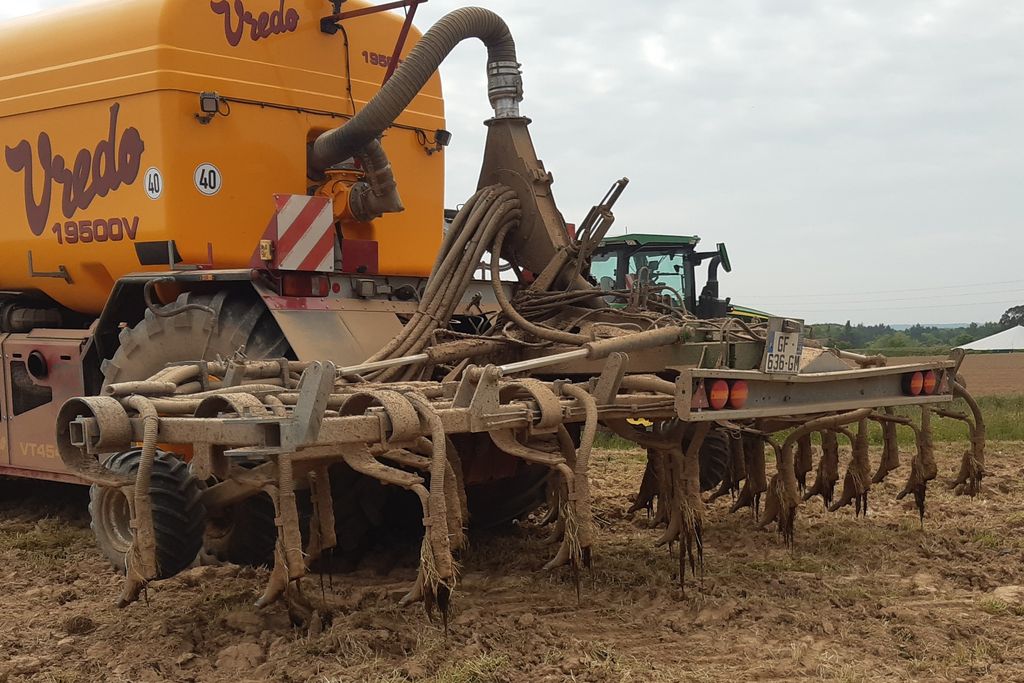 The first cost trends with an updated spreading machine

The manager is happy with the start and confident in the future. “We have equipment that has been completely repaired. Usually the engine and pumps were disassembled in detail, all hydraulic hoses as well as suspicious parts were replaced. Thus, the buyer receives a one-year warranty. Cuma expects a fixed fee of 2 euros / m3 for self-propelled.

At his construction site, which used a single supply unit that day, Romain Marche, a farmer near Chavan, expects the construction cost to be “around 3.5-4 euros / m.3». Of course, this, in particular, will strongly depend on the number of required tankers.

Godparents grouped together hold the road.