Originally founded by Capcom alumni, Inti Creates became famous for its work on the Zero and DX versions of the Mega Man license in the early 2000s. The Gunvolt series, launched in 2014 on Nintendo, Sony and PC, can be considered a direct successor to the Japanese Smurf adventure. To celebrate the release of the third and final episode in a matter of days, which was teased by a certain Keiji Inafune at the end of June, we’re having a group shot with adaptations of the first two canonical episodes originally released on the 3DS, the first of which has been available on the Microsoft Store since last month.

The action of the Gunvolt universe unfolds in the near future. Technologies, especially robotics, are very advanced. Some people, called “adepts,” have developed “septimal” powers that give them control over certain elements and superhero-like abilities. The all-powerful Sumeragi group develops weapons by enslaving adepts and learning their abilities. The Falcon, a secret organization that supports the Adepts, aims to destroy the Consortium.

Our hero, Gunvolt, nicknamed Azure Lightning and a former member of Faucon, is one of the most powerful adepts in the world and has, miraculously, electricity. He teams up with Joule (volt, joule, remember your college physics classes…) who, following the events of the first episode, melds his mind with him and helps him, increasing his abilities tenfold.

A second hero arrives quickly. Copen (protagonist of the spin-off Gunvolt Chronicles: Luminous Avenger iX) is a young human scientist who fiercely hates the followers he believes are responsible for his younger sister’s silence and poor health. He wields a septimal-suppressing shotgun and comes with a cute drone, Lola, whose strength belies his appearance.

The artistic direction fully embraces its kawaii side, very childish and colorful. The pixel art is mastered in the stages of the gameplay and enriched with very nice HD visuals during the interludes. The universe of Gunvolt, even as it depicts a ruthless armed conflict where madness meets betrayal, remains accessible, devoid of graphic violence and visually very close to the cartoon. Thus, it can appeal to everyone, young and old, which the manga style does not put off.

On the audio side, we stay within the codes of the genre, with catchy synth music that sticks well to the action, behind the bliss and explosions in chaos, and a whole chanted playlist, very typical of an “idol” that can be unlocked in the game by fulfilling certain conditions. The spoken dialogues are only in Japanese, the French subtitles have some errors and clumsiness, and the classic accented letters, the font used is not appropriate.

We take the same thing and start again

During the intro we see the return of Zonda, a loathsome narcissistic megalomaniac with methods as questionable as his beliefs and a particularly questionable plot left for dead in the previous episode (what a surprise!). Since misfortune never comes alone, his plan is to crash Sumeragi’s flagship into the city. It’s time to go save the world.

From the first level, we have to admit that, not knowing the franchise, we are a little lost between the interface that needs to be tamed and the relatively large gallery of characters that is needed in the force. The latter do not stop “discussing” in parallel with the action, with portraits and texts on the screen, which regularly breaks the rhythm. It goes without saying that our first impression is mixed, because the attention is constantly diverted and we do not know whether to go with it or to focus on the exchange of thoughts between the characters. 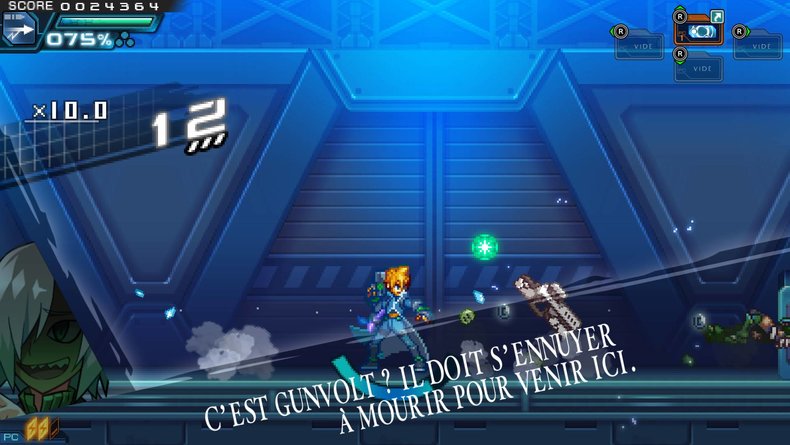 The best soups are made in old pots

The gameplay at first glance seems simple and effective: shooting, jumping, dashing, base. But what makes the name specific is the presence of a sensor that charges over time, represented by an energy bar for Gunvolt, a ammo pouch for Copen, and which offers several offensive AND defensive options. With a little practice and experience, we realize that this system is pretty well thought out.

Gunvolt can continuously detonate enemies and certain terrain after they have been hit and blocked by his main fire. Kopen, for his part, is much more attacking in his gameplay. Hitting an enemy with his dash, whether on the ground or in the air, teleports all of his subsequent attacks to the target for a few seconds, including Lola’s attacks, making it an essential element of his arsenal. If this skill is not used, characters can automatically “telescope” into enemy attacks.

If energy is depleted, skills are blocked and you overheat for a short period. Therefore, it is necessary to find a balance between attack and defense in order not to be helpless in a delicate situation.

After setting the scene, revealing Zonda’s Machiavellian plan, and introducing his court of well-typed minions, with designs and personalities more eccentric than each other, we have the choice of continuing the adventure with either Gunwalt or Copen. During this first phase, there are four levels available, different for each character, which can be played in any order, of course, with a theme that matches the villain we face at the end.

The latter, being “in his element”, gets an advantage from specific attacks and terrain advantage. Reflexes and observation are put to the test as his attack patterns are numerous and brutal during each of the three combat phases, the last of which adds an impressive fury that can change the outcome of a fight. Our victory allows us to recover additional weapons (main shot for Gunvolt, Lola’s laser for Copen), which gives us an advantage against one of the other bosses we encounter. This chifumi exercise is always nice, even if it’s entirely possible to do most of the game without using them.

Once this step is complete, progression becomes linear again with a slightly increased difficulty in the last four levels and pits us against the rest of the bosses until the final showdown. The epilogue, which ends very quickly, leaves an aftertaste of unfinished business, and for good reason… We’ll have to fight a little longer to get real endings, time and score attack modes, and five bonus levels called “Secret Missions”. .

The same player is still playing

Changing a character is done by going back to the title screen and loading their backup, which is done manually, which can be surprising today. Between levels, characters can change their skills, gear, create new tools from resources collected during levels, and develop a bond with their partner through short dialogues. The interface is similar to a pocket console, but remains simple and readable. Before you can invest in really interesting and sometimes cumulative improvements, you need to multiply the runs and a little luck. 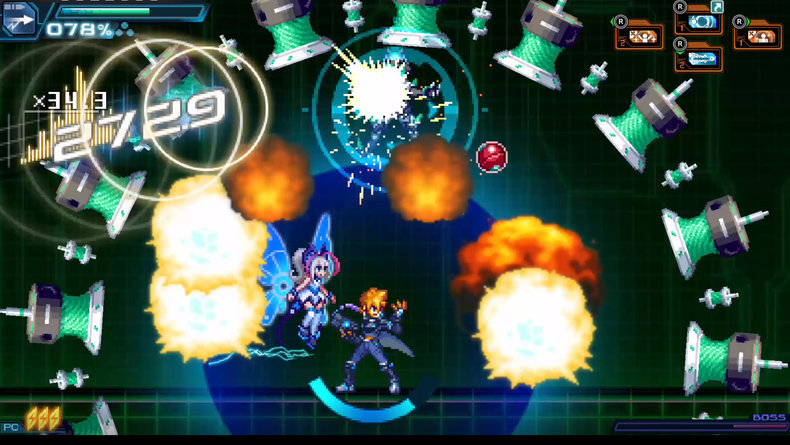 The basic scoring system prioritizes endless combos, multiple objectives, and cool execution. Once we get more comfortable with the controls, environment and bosses, the numbers start to skyrocket and so does the score at the end of each level, much to our delight. Add to that a hefty list of cumulative material recovery tasks, and we can see that the game is built to run quickly, and therefore benefits from good replayability. Achievement Hunters have a tough challenge because, with the exception of the very first one, which is unlocked very early in the scenario sequence, all the others require certain conditions, mainly getting an S on all levels. With each character. You have been warned.

Blue is not dead

As such, Azure Striker GUNVOLT 2 clearly has weaknesses. Even if for most Xbox players it’s just a “fake new 2016” with decidedly retro graphics and a very cute Japanese atmosphere, the title is especially enjoyable with a controller in hand. The action becomes tense, the bosses are original, crazy, confusing, and two game characters allow you to radically vary the gameplay. Whether you’re a veteran of Mega Man adventures or a newcomer to the genre looking for an “old-fashioned” action game with a touch of sophistication, Azure Striker GUNVOLT 2 will fully deliver on its promise.

Tested on Xbox One.