I. Presentation of the game

star Wars was a game developed by the company Game Lucasfilm and BEAM software and said by JVC, which was released in 1991 on Nintendo entertainment system (NES [ou Famicom au Japon]) and Ubi Soft for gameboy and Game Boy Colorthen the port in 1993 on Now GameGear and The main system from Tiertex LTD and published by U. S Gold. The game is published in her Nes and gameboy by Limited mileage in 2019 in simple or premium editions.

The game presents itself as an action and platform shooter. He occupies the overall plot of the 1977 film, giving it more freedom.

Different game supports also have some differences due to their specifications and power. So, the version gameboy offers a less beautiful and especially discolored aspect of the NES game. In some places, the difficulty has been improved by reducing the number of enemies on the screen. Other minor details relate to certain actions. So it’s easier gameboy destroy the tractor beam generator, not the NES. On the Sega side, the graphics (more colors and details, reworked character images) and sound effects have been slightly improved, but the rest of the game has not changed (except for the control buttons and some images for “cut scenes”) with the Nintendo console version.

It should be noted that each version of the game has certain differences in the number of enemies and their exact location in the game. Here are a few examples to illustrate throughout the worksheet. 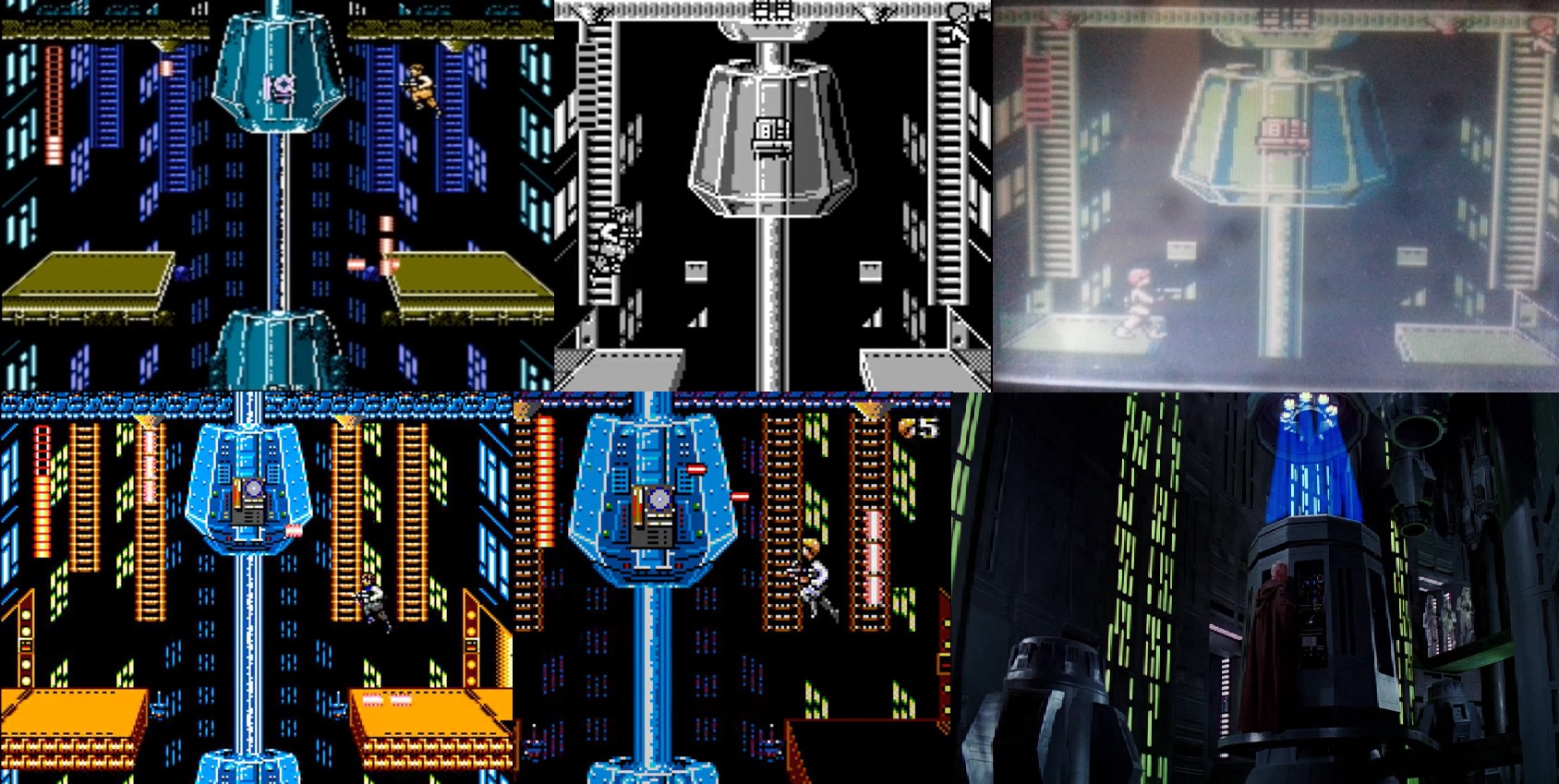 Depending on what the player controls (vehicle or character), teams may differ:

I For the characters

Up: go up the stairs, open the doors and elevators
Down: bend over or sit down, go down the stairs
Left: move left
Right: move right
/ 2: jump (hold to jump higher)
B / 1: Shoot or move the lightsaber (Luke only), run (hold it while the character moves)
Start: pause the game
Select: selection screen

Millennial falcon :
Directional cross: move across the screen
Start: pause
B / 1 and 2: Shoot

X wing :
Directional cross: move across the screen
Start: pause
B / 1 and 2: Shoot
A: proton torpedo 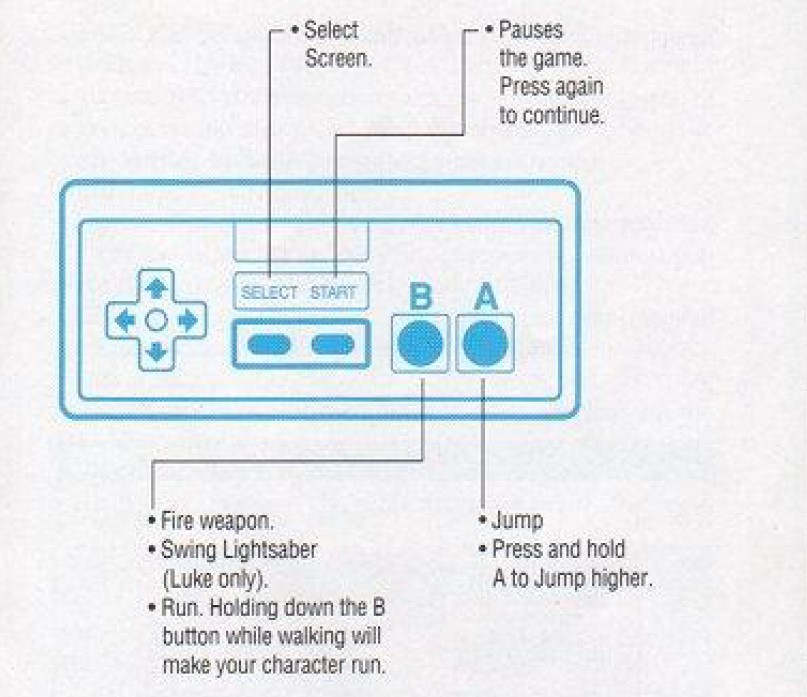 Excerpt from the NES game manual

The selection screen allows you to select a character and weapon if necessary. After unlocking, you can recreate three characters in the story: Luke Siuoker, Khan Solo and Leia Organa. R2-D2 and C-3PO can not be played, but can comment on the level of the game Obi-Wan Kenobi also does not play, but gives advice and can resurrect Khan and Leia in total 5 times. In fact, if a player loses to one of his characters, he can no longer play until the end of the game without using the abilities of Obi-Wan Kenobi. 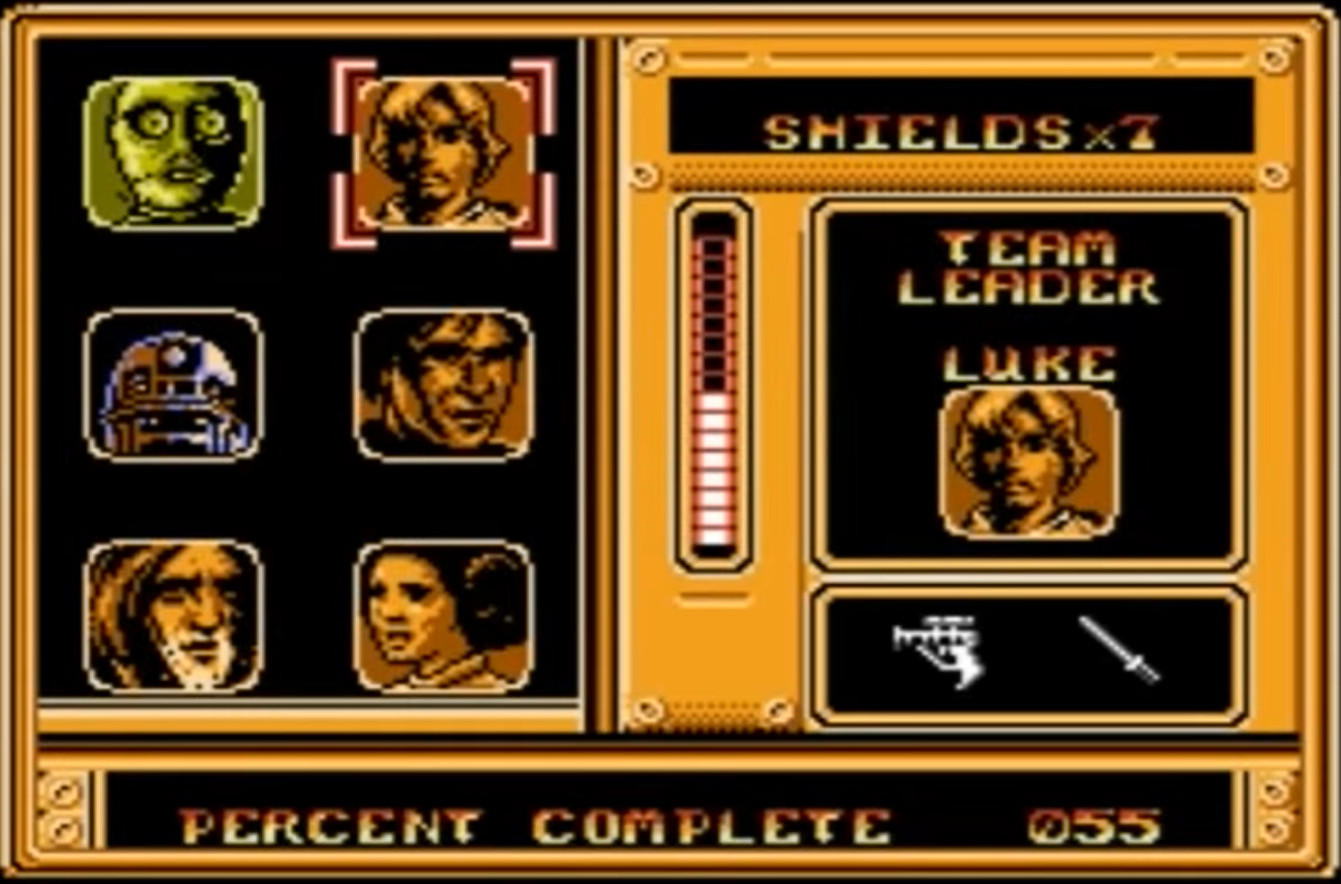 During the game, the player will have to face various enemies from the saga or invented for this occasion.
On the Tattoo, the threat is posed by laser towers or Banthas for the game landspeeder. The caves are inhabited by sandy people, wump rats, flying insects or giant snails. Java is hostile, and in addition to the stormtroopers you can meet bounty hunters and Bob Fett Moss Aisley.
The Death Star offers to collide with stormtroopers of different droids.

Difference in enemy positioning between Nintendo (upper) and Sega (lower).

Complexity star Wars can be reduced by collecting various bonuses on Tatooine: Luke’s lightsaber or even energy reserves for Millennial falcon. They are, of course, optional, as is a full exploration of Tatooine Caves at the beginning of the game. However, this is important to achieve 100% progress at the end of the game.

The game begins with scrolling the text of the film and a short cinematic screening Destroyer Vader, who captures Tantive IV. The short text returns to the context of the game. The player finds himself on Landspeeder Luke Skywalker, who must find R2-D2 with the help of Java before joining Obi-Wan Kenobi and discover his fate.

From there, Luke must join Moss Isley to meet Khan Solo in the canteen, then join and board. Millennial falcon. Alderaan is destroyed, and then the player will go to the Death Star to save Princess Leia, turn off the imperial traction beam and return to the ship.

In space, falcon should be avoided Tie Fighters imperial. Then the player sits on the board a X wing and attacks the Death Star and strikes a deadly blow.

The difference between the graphics in the phases of the texts used to promote the script of the story
on the left is the Nintendo version, on the right is the Sega version

2. The difference from the movie

Although the history of the film is respected in its main lines, many differences enrich it gameplay and challenge the game, to the detriment of fidelity to the original work. Although order in the film is important for progress, Tatooine is an open world. Luke can leave for Moss Isle early. Many enemies and cave explorations have been added to this part of the story. Obi-Wan Kenobi also meets the end of one of them.

Mos Eisley also offers its share of new enemies and progress in the city (and canteen) in a straight line. Various interactions and negotiations disappear.

The Death Star also has enemies not seen in the film. This is a player-controlled character who turns off the tractor beam, not Obi-Wan Kenobi. The place is also a network of huge labyrinths of corridors in which the characters develop without disguise. The big prison escape scene also disappears as Leah’s camera can be found around the platform, and even a copy of the princess disappears. 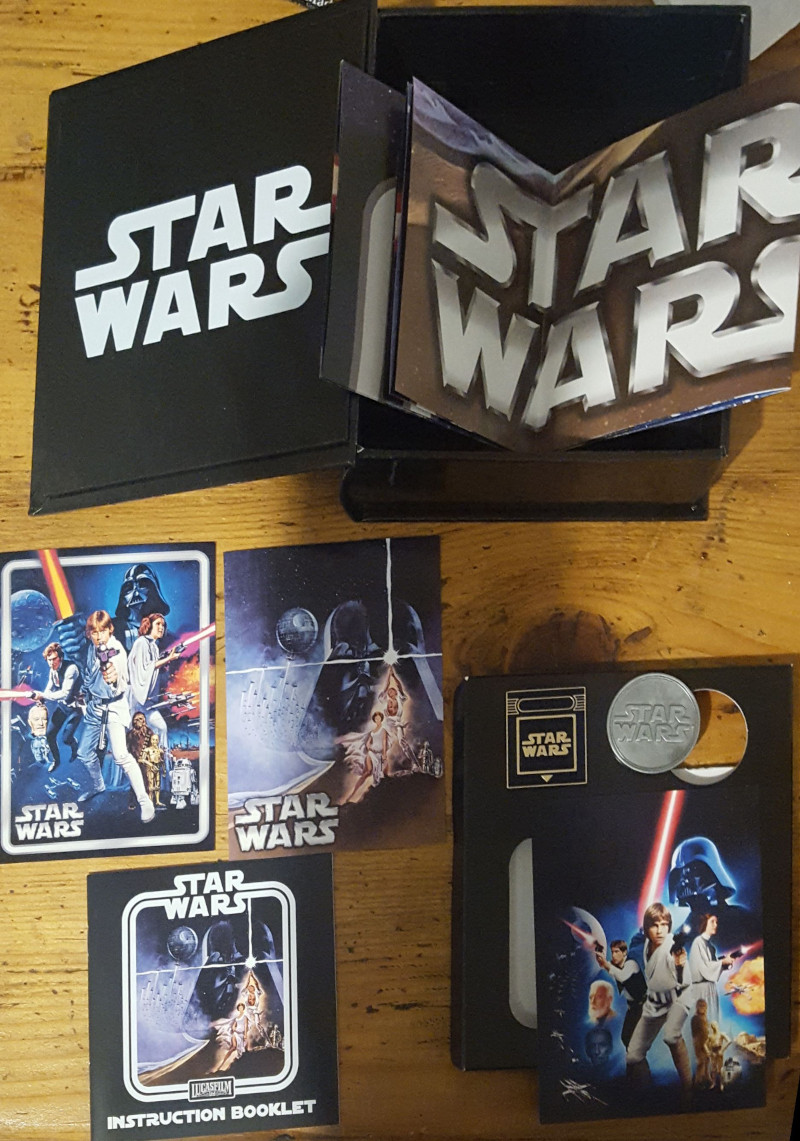 IV. around the game

The game continued The empire strikes back which uses the same concept of this. With the release of Super NES, the new game has been redesigned using the basics of this: Super Star Wars.

This version of the game should not be confused star Wars and the Japanese version of Namco from 1987, which, although within the general scope of the film (leaving Tatuin and destroying the Death Star at the end), offers more script freedom to add a few plants and many enemies not previously seen in the film.

Files created with this source: