On vacation in Mountain ? There are many treasures to be discovered while walking, hiking or trekking: they have four legs, a pair of wings, sometimes even antennae… There are six main mountain ranges on the French mainland: the Alps, the Pyrenees, the Massif Central, the Jura, the Vosges and Corsica. A wide variety of animals lives in these natural conditions. Here are ten animals that can be found among the most symbolic and easily recognizable representatives of the mountain fauna of France.

Mountain spaces are often protected. In the mountains, as everywhere, animals touch each other only with their eyes, and the rules of respect for nature are established by nature parks.

He is the king of mountains. An imposing mammal, the alpine ibex is nevertheless very agile and climbs the steepest rocks without hesitation. In summer, its fur is light brown. You have to climb to a great height to see a herd of goats resting on an alpine pasture or in the shade of the rocks. Males are easily recognized by their large, slightly curved horns (sometimes over a meter). Females, called etans, have smaller horns. As the name suggests, the alpine ibex lives only in the Alpine Arc. On the other hand, it has a Pyrenean cousin Iberian ibex. Extirpated in France at the beginning of the 20th century, it is being reintroduced in the Pyrenees.

Another symbolic animal of the mountains, v brimstone differs from the goat in thinner and shorter horns, curved like hooks. In summer, its fur is brown (vs. black in winter), and its face is covered in black and white stripes. He is also an outstanding climber: he can climb 1,000 meters in ten minutes. To see it in summer, you can scan the snowfields with binoculars to try to spot the black spots of a herd of chamois. Also don’t forget to look at the ridge line, you may see an interesting chamois head sticking out of the rocks… In France chamois can be seen in the Alps, Massif Central, Jura and even the Vosges. In the Pyrenees, it is replaced by a very close relative: theisard. 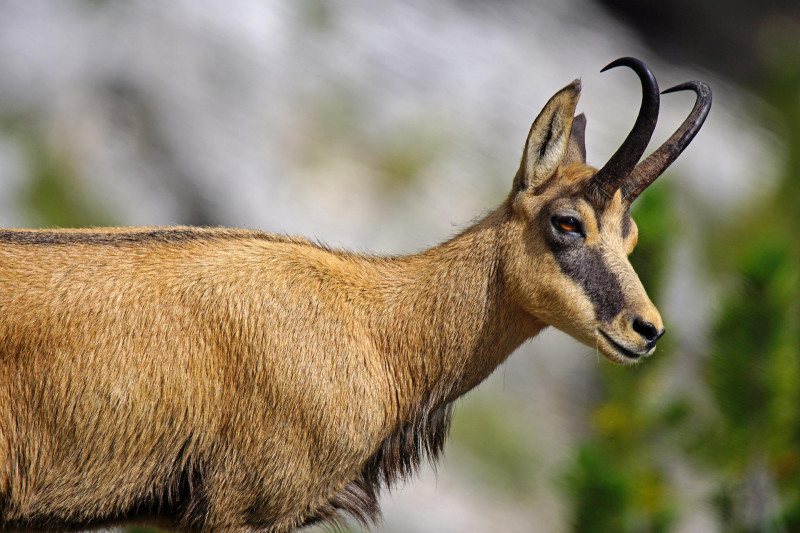 The mouflon is an animal that people brought to Mercantour since 1949. Since then, it has permanently settled in the Alps, as well as in the Massif Central and the Pyrenees. This is a genetic product obtained, in particular, from Corsican mouflons. The latter, very similar, can be observed in the mountains of the Island of Beauty. We recognize the male from moufflon to his great curved horns and white muzzle. Females have small straight horns or they are completely absent.

It is probably the most famous mountain mammal and, above all, the easiest to observe. Alpine marmots are found in high mountain meadows. They are often seen frolicking in the mountain pastures from afar. They can also be recognized by their powerful cries that allow them to warn their fellows. To pass the time watching them, you can scan the rocks that dot the mountain plains with your binoculars: you’ll have a good chance of seeing marmot bask in the sun. Contrary to what their name suggests, marmots can be seen in the Alps, as well as in the Pyrenees and the Massif Central. Even if they are not very shy, you should avoid approaching and feeding these animals. 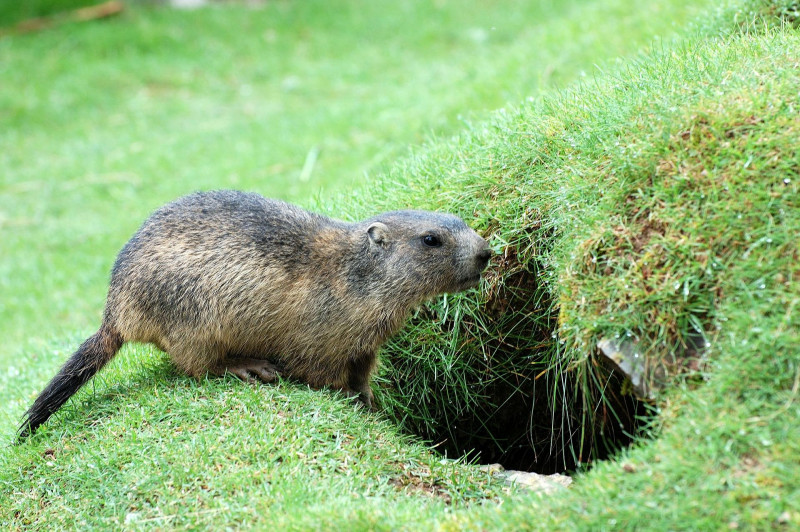 This is the groundhog’s worst enemy. The latter is actually part of the privileged regimeRoyal eagle. Groundhog calls are also a good way to spot an eagle: if you hear it call several times in an alpine pasture, chances are that a predator is flying overhead in search of prey. This majestic predator (wingspan of about two meters) is brown with white spots under the wings. He likes to spin in the sky in following warm air currents to gain altitude. Care should be taken not to confuse it with other birds of prey, such as buzzards (which have rounded wing tips) or kites (which have a pointed tail). It can be seen in all the great massifs of France, with the exception of the Franche-Comté mountains, where sightings are exceptional. 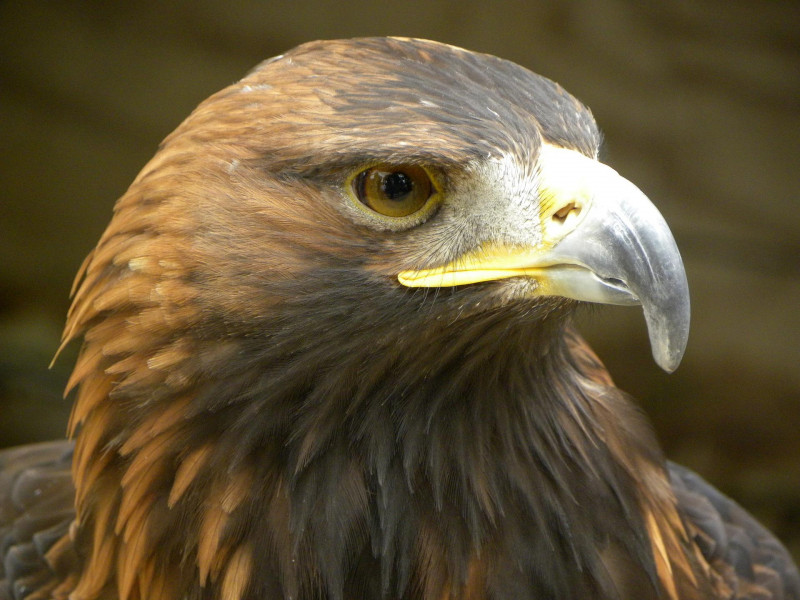 WITH White-headed rash, we enter another dimension: some individuals can reach a wingspan of three meters. This scavenger can be recognized by its featherless head, which allows it to search for food in animal carcasses. In flight, it can be recognized by its (very) large beige wings edged in black, as well as by its short tail. In addition, if you see a white-headed vulture in flight, there is a good chance that you will see other individuals following it: sometimes dozens of them soar high in the sky in search of a carcass. In France, it is found in the Pyrenees, the Alps and the Massif Central. There are three more types of vultures. They are rare, but we can remember bearded man, which is the largest bird of prey in Europe. It cannot be confused with its orange belly, black beard and diamond tail. 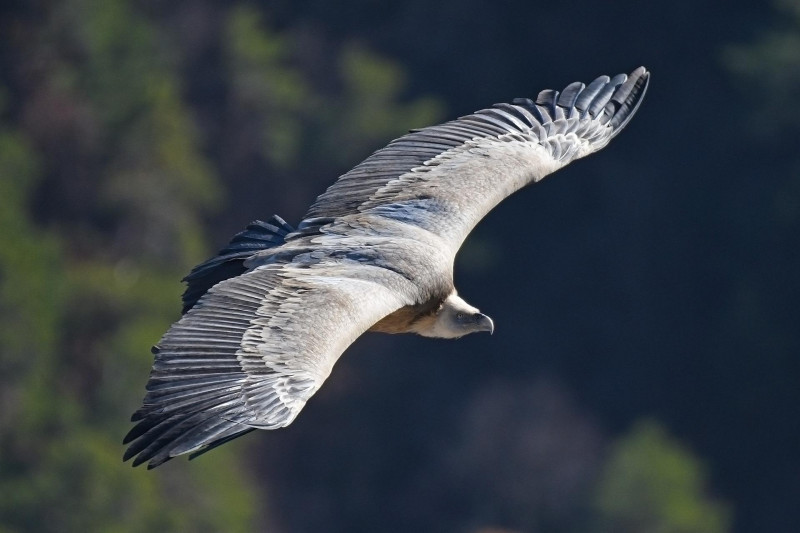 in yellow-billed shuttlecock crow, belongs to the crow family. Like them, he is all black… except for his yellow-orange beak. Lives in colonies on high rocks. A large group of black birds flying over the ridges? It is likely that these are beetles. They can be recognized by the sound of the flute. They can also be found near mountain huts, where they are attracted by the leftover food of tourists. They live in the Alps, Pyrenees and Corsica. 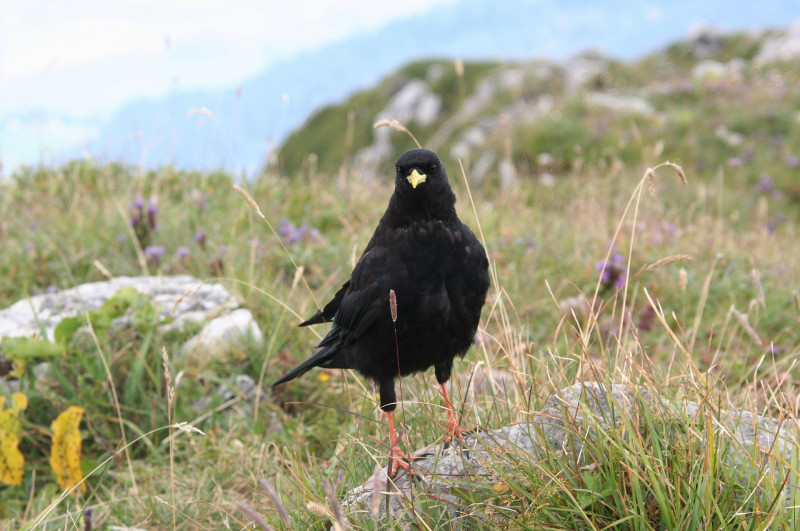 This is an amazing bird. The neverol alpine one of the rare birds that likes to live in the middle of eternal snows. If you can meet them in flying groups in the mountain pastures, then the niverol first of all appreciates the large stony spaces at a height where the rocks meet the ice. They feed on the few seeds and insects that can withstand the extreme temperatures of the mountain peaks. Looking quite similar to a sparrow or sloth, the niverolla is a small sparrow-like bird that can be identified by its pale body and wings barred with black and white. It can be seen only in the Alps. 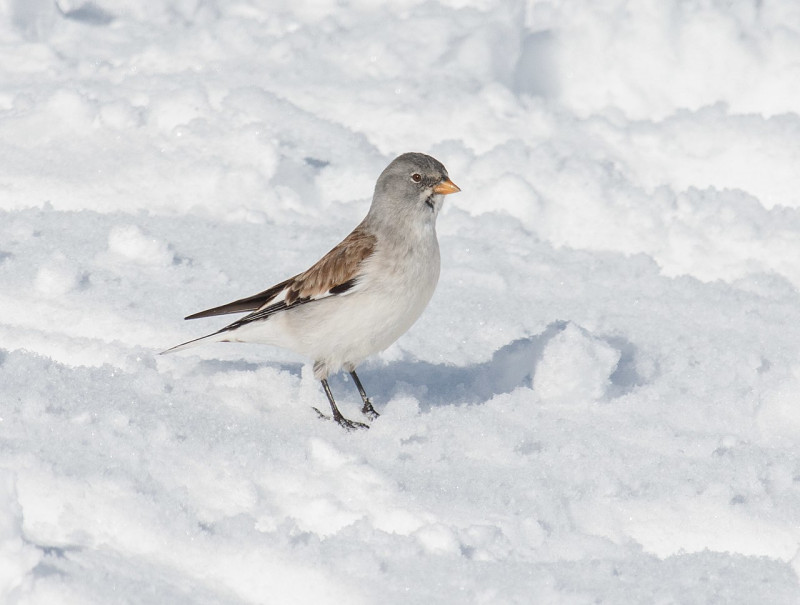 in alpine newt it is an amphibian that lives in high mountain lakes. In the Alps, they can sometimes be observed at an altitude of more than 2,500 meters! If we are lucky enough to see it from the water, we can recognize it by its orange belly. The rest of his body is dark gray with some black spots. Otherwise, he can be seen suspended in the water at a height with his legs apart. The newt has a specific life cycle: it lives in water only in the spring, during the breeding season. At the end of summer, there is a good chance that you will see it on the ground, hidden between stones. But at altitude, the newt changes its cycle and can sometimes spend a whole year in the water. It lives only in the east of France, so there is no need to look for it in the Pyrenees or Corsica. 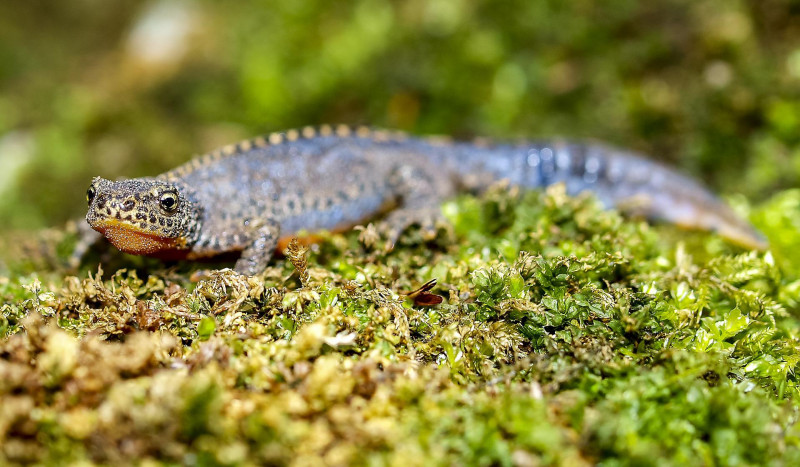 The Rosalia Alpine it is a wonderful mountain insect. It is light blue with black spots. But what is probably most remarkable about this animal is its large antennae: in males, they are larger than the rest of the body. It lives in high mountain forests, in the Alps or Pyrenees, and lays its eggs in dead wood. During summer days, adults come down to the ground: this is the best time to observe them. Otherwise, the rest of the time, rosalia live in the crowns of trees. This beautiful insect is endangered in France: it is classified as vulnerable and protected throughout the territory. 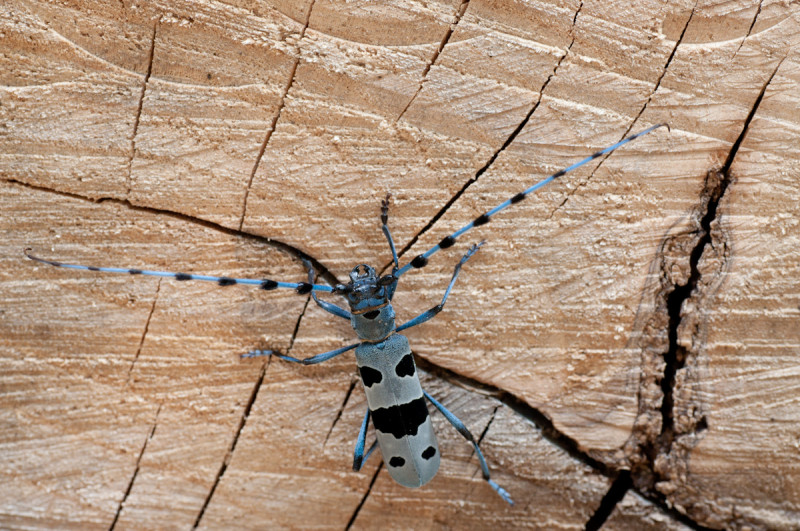